From the magnetic plains of abandoned computer shelters.

"Took your sweet time," the girls in the front exclaimed, waving little red, green and blue flags. I wasn't sure how I ended up at an RGB appreciation rally, but there I was, standing behind a microphone decorated with colorful strips of paper. The sweaty crumpled paper with a speech I apparently prepared some time ago clenched in my hand would prove most detrimental. Shakily I unraveled the moist ball and looked at what I wrote. Clearly this was the work of the CONSUL typewriter I reappropriated from a colleague's attic. The faded monospaced letters (I never bothered to purchase a new ink tape for the machine) were very brief. "Monochrome ftw," I whispered to myself, as I ran my eyes over the note. Of course the microphone was on.

Why anyone bothered to paint a melon with stripes of the three colors, I didn't exactly bother myself with ruminating on, as one landed by my feet. Somewhat intuitively my next utterance was a simple: "flee!" Aerially deployed tomatoes, zucchini's, oranges painted blue, I even saw a small child trying to hurl a pumpkin decorated with RGB stickers, accompanied my retreat. It seemed the public's effort was spent on making sure all the edibles were of one of the three colors. Had I the time and courage, I would've defended the validity of any colored fruits and vegetables, since - wasn't that the idea of RGB mixing?

BONK! That was just a tangerine (painted red?) hitting my leg. Nearly by the exit now. "Wait!" I shouted. What? I stopped and held my arms up, facing the menacing crowd. Why did I do that? I was almost free. The fruitable onslaught paused. Everyone waited for what my next words would be.

"I forgot to take out the laundry!"

Another night well slept. Clearly today was the day to get the $1 super glue from the Vietnamese corner store and fulfill the promise I made to Paul 4 months ago. "I'll put it together and show ya!" 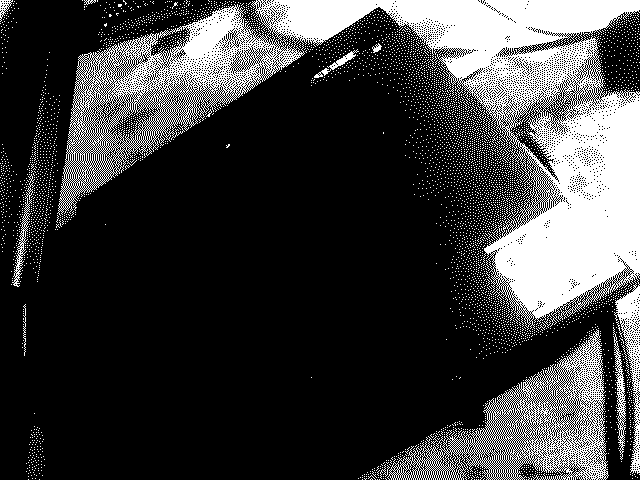 Sometime in the summer of 2022 I got my hands on a beat-up IBM Thinkpad X41. As someone who grew up with the bulky machines and even got to work with them professionally, I developed the nowadays everpresent disease of old-thinkpad-worship. But my desire to own everything-thinkpad ends with the 40 series. This X41 seemed like the proper culmination to my collection.

It all started when I went to college and my father handed me a refurbished T23. Understand that back then I felt cheated. At that point in time it was already an elder machine and I was coming from a top-of-the-line dual core MSI laptop I bought with a paycheck from a summer job at the local fast-food-chain (I spilled coke into it). I shrugged it off and was grateful, but my mindset was nowhere close to where it is now. By the time I moved out and bought a newer machine, I gave the 'obsolete' T23 back to my father, who asked for it, seeing I was dancing with the newer tech of the day. Lord knows what has happened to that machine, but I think back on it sometimes and curse my ignorance.

But this is not a story of my technological woes. This is a text on a beat up X41 I 'rescued'. 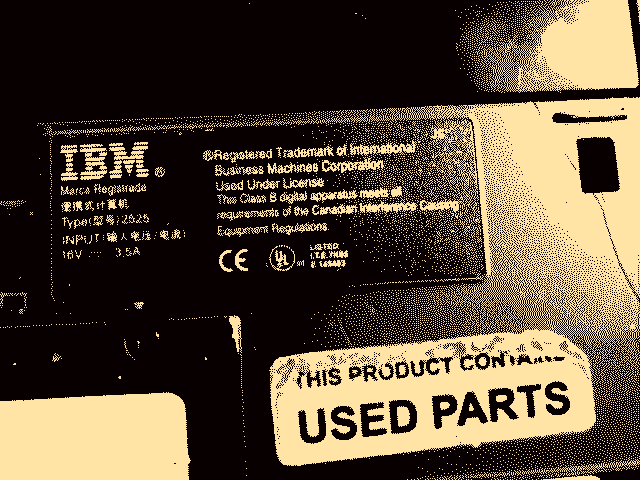 The guy met me by the statue of Jakub Arbes, the writer responsible for Saint Xaverius, Newton's Brain, and other pinnacles of Czech literature no one bothered to translate (yet). I was in a rush - I was supposed to meet a friend from Brno to discuss his surrealist literature collection. The boy inherited a library after a deceased friend of the family, boasting original prints of all the Czechoslovak surrealist authors from the 20's. But I digress - the ponytailed feller looked at me with a smile, probably happy somebody wanted to take the machine off his hands. "Why are you selling it?" I asked. "Well, the wife said I had too many," he replied with a smirk. "Ah, you have the same disease I have then?" We both laughed.

$25 for the machine with a new after-market battery and a charger. I didn't want the charger, I already had 5 of the 'ORIGINAL IBM' chargers. He insisted on showing me it worked. The Antix linux distribution was installed on it. It turned on. Great. I didn't care about the rest of it.

"Ah, Antix linux..." I faked my amusement. I just wanted to grab the machine and get on with my other business. But the man was insistent on pursuing the conversation: "Aye, it's the only thing that really works on it." I would prove him otherwise. 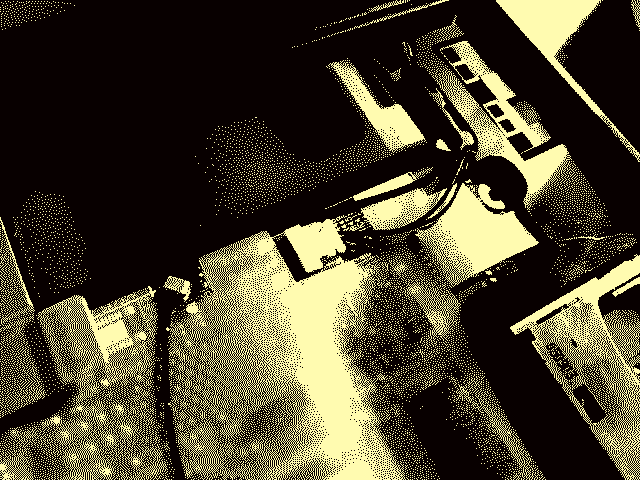 After the busy day I made it home. As with every other purchase of a thing I need, I was joyous. I took it out of the bag and set out to take it apart, check its innards and get on with the rescue. Unfortunately for you, I have completely dissected the machine then, cleaned it and re-pasted the CPU, without any visual documentation. You'll have to take my word when I say that it was dusty, dirty, dried up and I lost 2 screws. 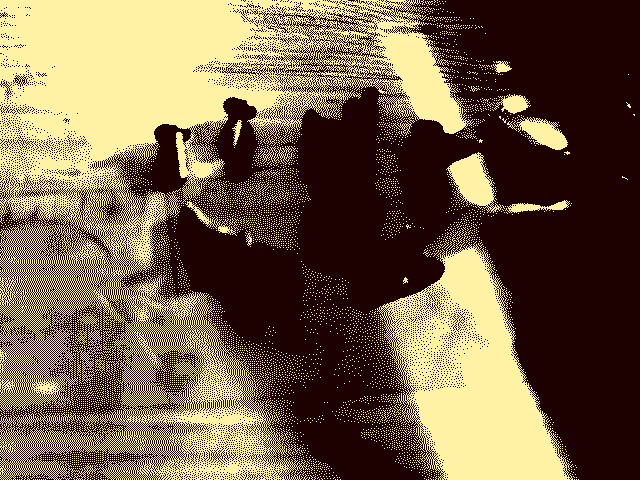 For the sake of this text I wasn't going through that experience again. Now, don't get me wrong, I take tormenting pleasure in taking apart electronics and attempting to put them back together, but the success rate of doing it right is somewhere in the ball park of 'had I done it again, it would be like bluffing at a poker game with the devil, holding a pair of 4's. 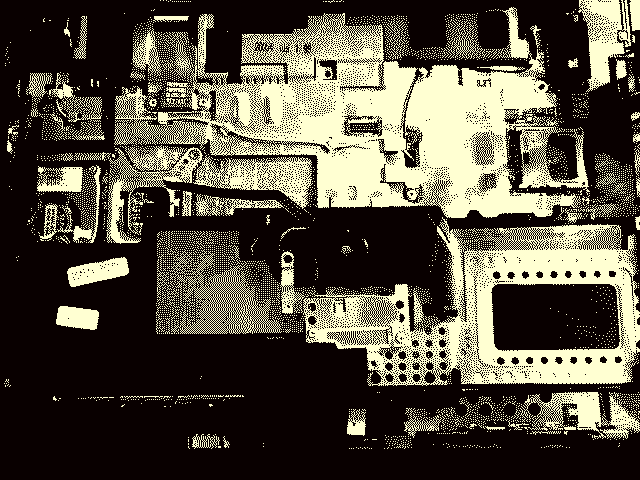 I put in a 1GB stick of RAM, effectively maxing it out and putting it back together. As for the OS I chose - I have to be honest here; I never before encountered the mini-sized IDE HDD that occupied the machine's disk slot. And I did try putting a regular sized one there, leaving it sticking out, but the computer wouldn't register it. I was stuck with a single drive and had little room for experimentation. 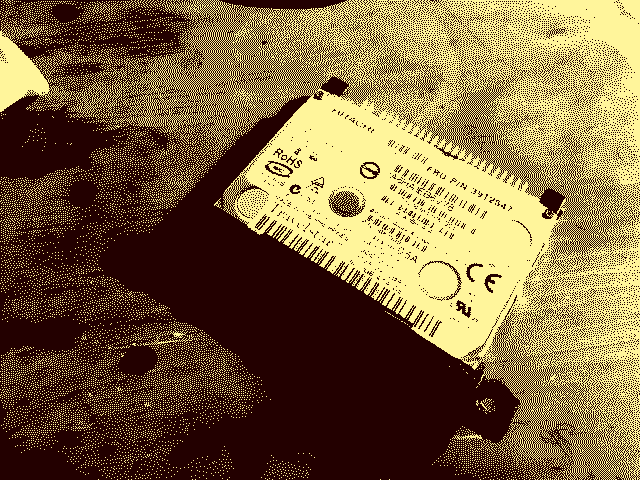 Same issue would bother me here, but eventually, after several tries, a FreeBSD with the i915kms module would give me the desired results. The only annoying issue was that it would take somewhere around 2 minutes for the module to load after booting, but without it, suspending wouldn't work and the machine would wake up without power to the display. 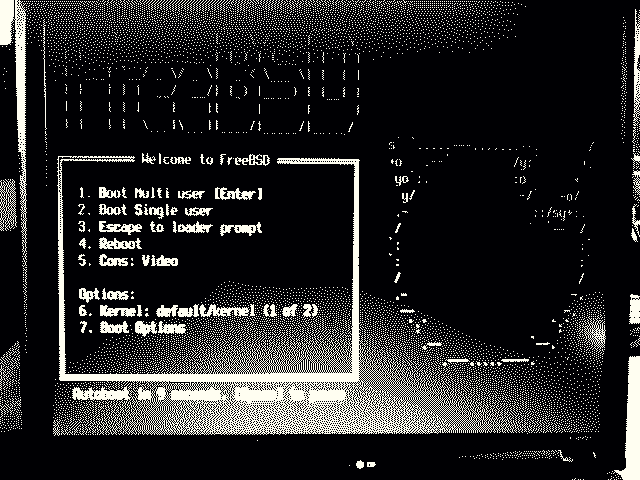 For the time being I was satisfied with the results. I installed a minimal desktop environment and set it aside, knowing I would have to get back to the machine eventually to breathe a new spirit into it properly. Fast forward to 4 months later:

I have to mention, for my friend tbm's sake, the machine must have already been 'rescued' some years ago. Apart for the decimated plastic bezel, which was ruptured in several places, the most notable feature was the Spanish keyboard with Czech stickers taped over some of the relevant keys. As an aesthetician, this felt like an awful decision. I set out to remove the stickers and return to the machine its exoticism. 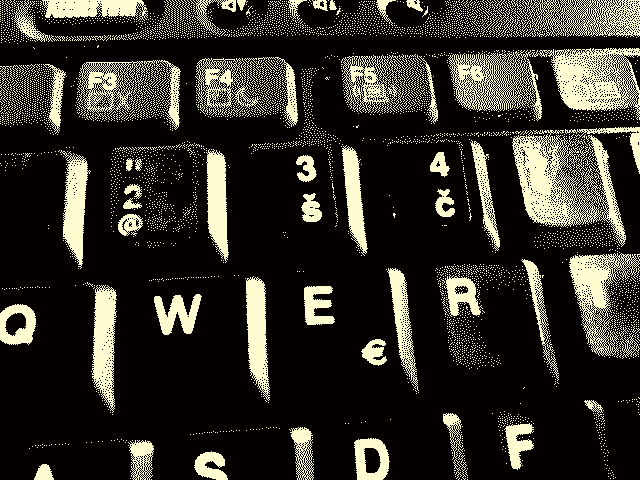 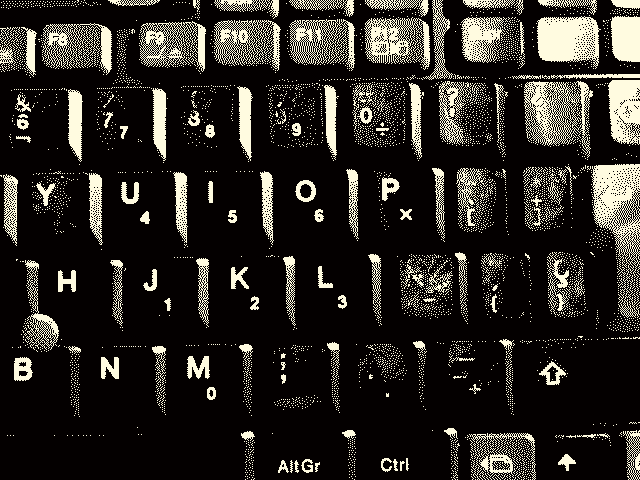 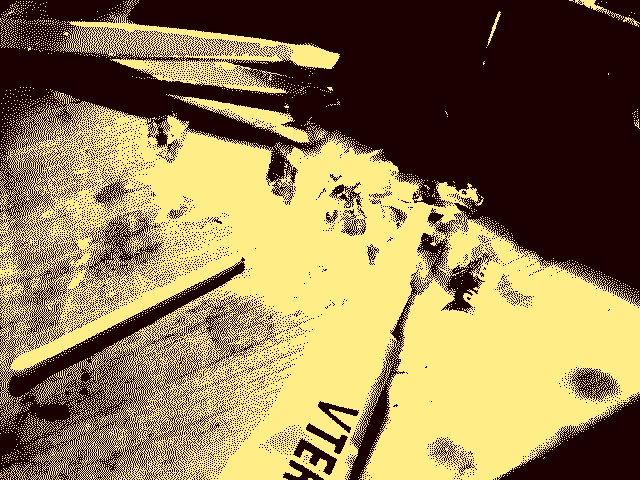 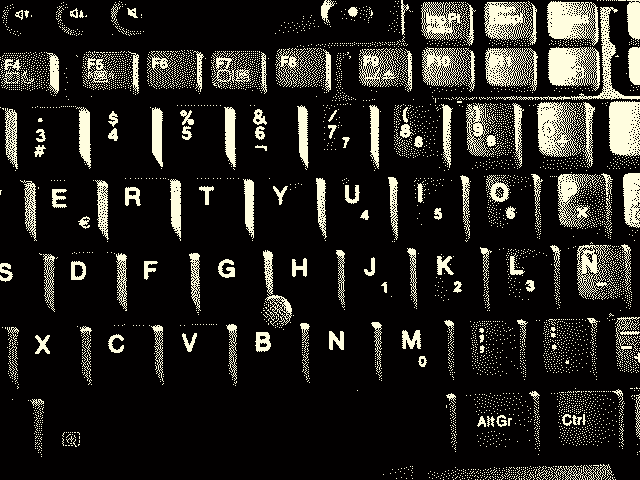 The next step was to superglue the broken parts back together. While I would very much prefer to get 'new' bezels without damage, this seemed like the next best thing, and after all - this X41 had history within its plastics. Who was I to take that away from it? 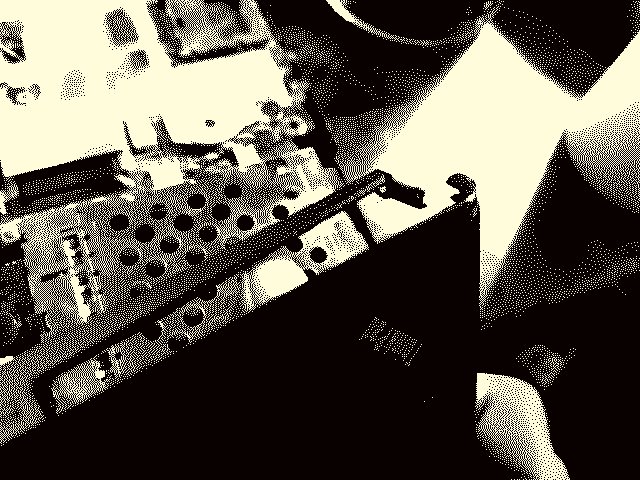 Still annoyed by the lengthy boot time, I played around and eventually reached success. Switching to an sc driver (instead of vt) made the suspend function work without the need to load the intel drivers. The machine now boots fairly quickly and everything I could ever need it for works fine. I also put in the newest wi-fi card I had - it works flawlessly with my phone's hotspot function. And yes, I did already take it to a hipster café to look smug in the eyes of the Mac users. And no, nobody actually cared. 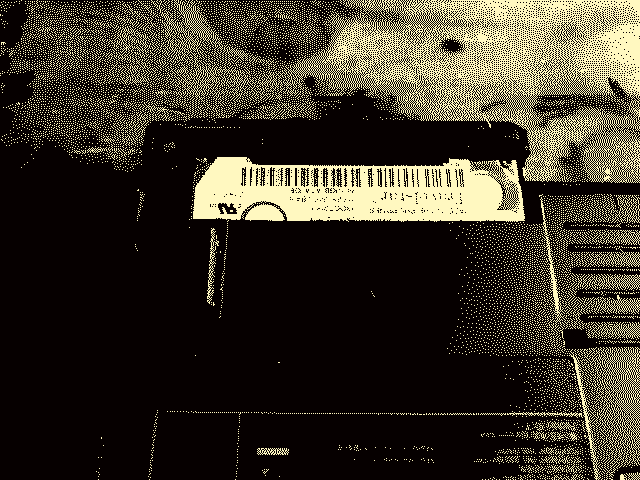 I wish a photo could tell of the satisfying click sound.

The battery lasts somewhere around 3,5 hours with little tweaking and throttling down the CPU. I use cwm and ratpoison, depending on my mood. Most of my workflow is tied to a terminal, so funnily enough - this 20 year old machine is just as usable as anything else in my possesion.

Internet browsing is done through links2 or luakit, if I really need the taste of the modern web. One can even watch videos in 360p rather flawlessly. 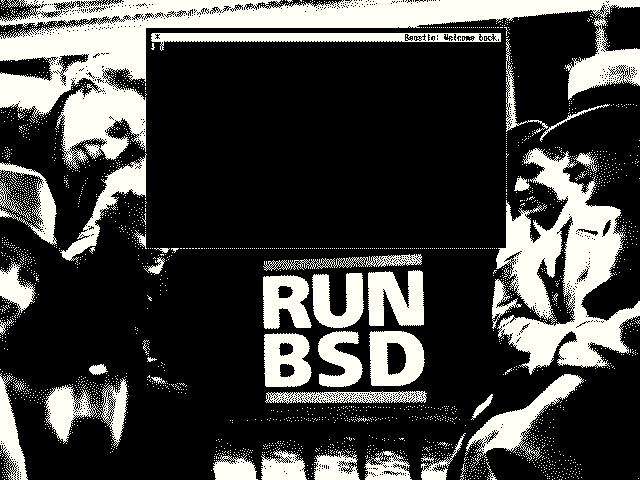 "But why do this, prahou?" I understand the notion. There's not really a need to do this, is there? You could probably get a phone for $25 that will be able to do anything this computer can thrice as fast. I can't deny that. But there is a philosophical issue at play here. The way I see it, all computers ought to be treated with respect, and the elder ones doubly so. 40 or so years ago a farmer placed his fingers on a keyboard of a brand new MS-DOS machine, thinking "what the hell have I ever done to be able to even lay my eyes on such a divine machine?" I only wish for us to approach technology with the same set of eyes. Every year processors run faster, graphical cards render better, memories remember more... and we've grown accustomed to it. There's this idea that computers are just there. They exist and do our biddings, and yet - most people don't understand how. Your average 'obsolete' machine rescued from the junkyard will always be enough to anyone with the right mindset and a will to learn, just like it was to the farmer 40 years ago. 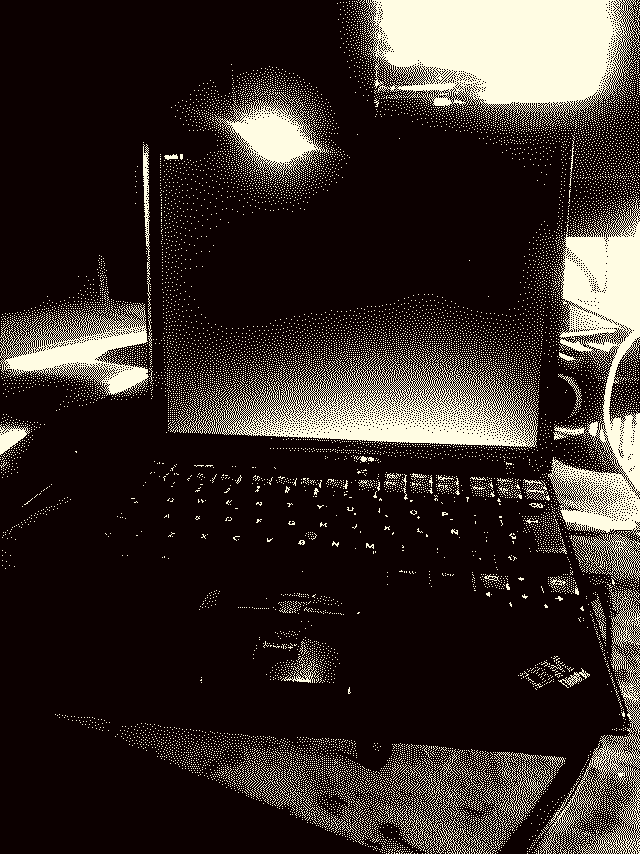 Did I mention the orange THINKLIGHT(tm)?