I stuck my head out and saw the proposed challenge. Since I have the perfect match in the form of IBM's T42 and I do enjoy the occasional self-flagellation, I hopped on board. I see it as a useful experiment as far as monitoring of one's usual habits goes and re-evaluating the things that will undeniably be missed due to hardware limitations.

The play is simple: A single core processor and 512 MB of RAM for a week on a personal computer that is not used for work, as the project does not aim to decrease anyone's working output. Nevertheless, all personal and free time activities that one performs on a usual machine are to be performed, and possibly substituted, on the Old Computer.

While the experiment, or challenge, does have a playful ring to it, as solene notes in her description, certain feelings are bound to arise. Not only will the bloatedness of the modern web become ever more apparent, as most popular websites simply desire far more than the proposed limit of 512MB of RAM, moreso will the habits that one takes for granted, ie: social media, video watching or playing (recent-ish) video games, come to reveal their addictive nature as one attempts to mitigate the lack of access to the usual stimuli of the computer world. While the rules state that the use of a smart phone is allowed in full extent, and even encouraged specifically to record personal needs for learned behavior, since I have recently drowned mine and have not bothered to procure a new one, I will be forced to make due with the elderly machine. One may certainly argue that there are those, who are either forced to use old hardware due to necessity, or who willingly retain such hardware in working condition as it suits their needs. But to the modern digital citizen the experiment may very well reveal just how much their use of free time is dictated by sufficient hardware.

Today I gutted the T42 and swapped its entrails for a 512MB stick. I have previously upgraded it to its maximum capability, just to see how far I could push the old machine, nevertheless turning it into a glorified digital typewriter and a book reader.

It is running OpenBSD 6.9 on an Intel Pentium M at 1.7GHz and a 40GB PATA HDD. I do not use a wi-fi and I have already noticed an issue with ethernet, which refuses to work after resuming from suspension. I'd rather put the computer to sleep than power it off, but I expect there will be a plenty of time to look into the problem during the course of the challenge. The screen has a resolution of 1024x768 and even though the machine is pushing the legal drinking age in the USA, looks still crisp. I will post a photo once I figure out what to take a picture with.

Since I fall into the category of minimalist degenerates (not to be confused with minimalists) and the majority of my work-flow is already bound to the terminal prompt, most of the software I use on a daily basis should have no problem running on the Old Computer. I will update the list of software I will be using as the challenge progresses, but as of now here's a list of several programs that I intend to use. May it provide fellow challengees with inspiration.

As for the window manager, I will be staying with my favorite cwm, but I might explore other options, since I doubt I will have dozens of windows open.

Link to other pioneers' progress.

The fan isn't on yet. It'll come squeaking in morse soon enough. I can tell Puffy is not nervous occupying the T42's hard drive from more ancient times. Not trusting anyone ends one in comfort. We did not know where the machine came from, but it landed in our laps like I wish my erotic dancer friend would - for three packs of cigarettes and a bottle of Bohemian 'rum'. (The word is in quotes since it has been legally declared by the European Booze Heritage Council, or EBHC, 'as not legitimate rum, for rum is for pirates. But ever since pirates invented streaming services, they moved from rum to fine wine - second to last bottom shelf and higher.)

The DVD drive pops open from time to time. It's either my violent typing on the keyboard hitting some nerve cable operating the opening mechanism of the drive, or the blowfish is sending me smoke signals again. Whatever its intentions, the T42's been sailing the ship with the rest of us fools and paranoics. Its innards twice gutted, erased and degraded. The drive looks okay in very specific light angles, and won't itself do much to the modern DVD-drive connosieur, but the rest of the machine is drooling material for any orifices of retrofiles of various fetishisations.

I'm in CWM. The battery light flickers. It can do 20 minutes of the terminal experience with its original maximum capacity reduced to 27%. Until recently, when the T42 craved power, it woke up a couple of drum bursting sirens, as if to scare the rats away. A script that plays the counter-strike audio clip for a defused bomb whenever the computer is plugged in is what I think of. It has been commended as good idea in the #old-computer-challenge bar to remove the battery, since it's not doing much but consuming power, writhing in place, trying to feed a stomach that's no longer there. A battery will give you its maximum capacity exactly once. The rest of its life it will busy itself by trying to match the one output when it was used for the first time, agonizing as it grows older and progressively worse by the minute.

The battery is out and the revolutions of the fan reached a very specific number where it beggins purring without a hic. Unlike the battery, the DVD drive is not plug 'n' play, note to self. Staring at the gaping hole where the optical drive used to be, I'm reminded of all the possible pieces that could go there. Clearly this machine is from an era where changing the guttworks of one's computer was possible and even encouraged. Don't need an optical drive? Trade it in for a second hard drive. Maybe you could fit a GPU in there and surely one will find a use for a COM port, if he salvages long enough. The T42 can choke up to 2GB of RAM and there is a plethora (at least 6) of CPU models that would fit its socket. The digital marketplaces are blooming with all sorts of components for aging hardware and it can be quite astounding to see what people are giving away, thinking it obsolete.

Reminds me of that jared-the-thinkpad-guy. Man sold his decency for advertising an upgradable laptop with RAM and CPU soldered on, so the end result was the same machine with a better hard drive. That's not to say you can't tinker with a machine you purchase today. But the chances you have to do whatever you want have vastly decreased for the average consumer. The standard of dumbing down is apparent.

The Curse of Pretty

Take a seat by the fire and let me tell you a tale of webcrawling. The cautious man already knows of the Jabberwock, but it is here with a single core CPU and 512MB of RAM that the powers that be reveal themselves. Say goodbye to javascript and forget the big web-browser players. The only browser that works out of the box on an i386 is luakit. It'll work fine for websites with little to no JS, but it won't hesitate to crash, should you visit one of the modern implementations of web. That's where links/lynx/w3m come in to help you stay in touch with recent information. Text browsing has a few advantages: no JS copulation, text formated to your liking and overall less obtrusiveness. Even though 'please, use javascript' will be one's new permanent comrade, if information you're looking for exists in written form, you'll get it.

Undoubtedly one of the big JS-heavy players is youtube, its site inaccessible through a text browser. Luckily one can use any of the various invidious instances that provide a js-free youtube experience to browse for videos in a text browser, find the original link and stream it through mpv+youtube-dl or download it. As long as you have access to a link leading to a youtube video, you can watch it without a browser in the comfort of your shell. mpv will stream any direct link to a video.

Similarly, you can use feh for remote image viewing. Since the text browsers do tell you: "This is where an image is!" and can present its URL, it's just a matter of a few seconds to display them externally. Likewise will you perhaps notice that images don't add much to the reading experience unless absolutely necessary.

Gave up cwm for ratpoison. My housemate [rat] is not very happy. 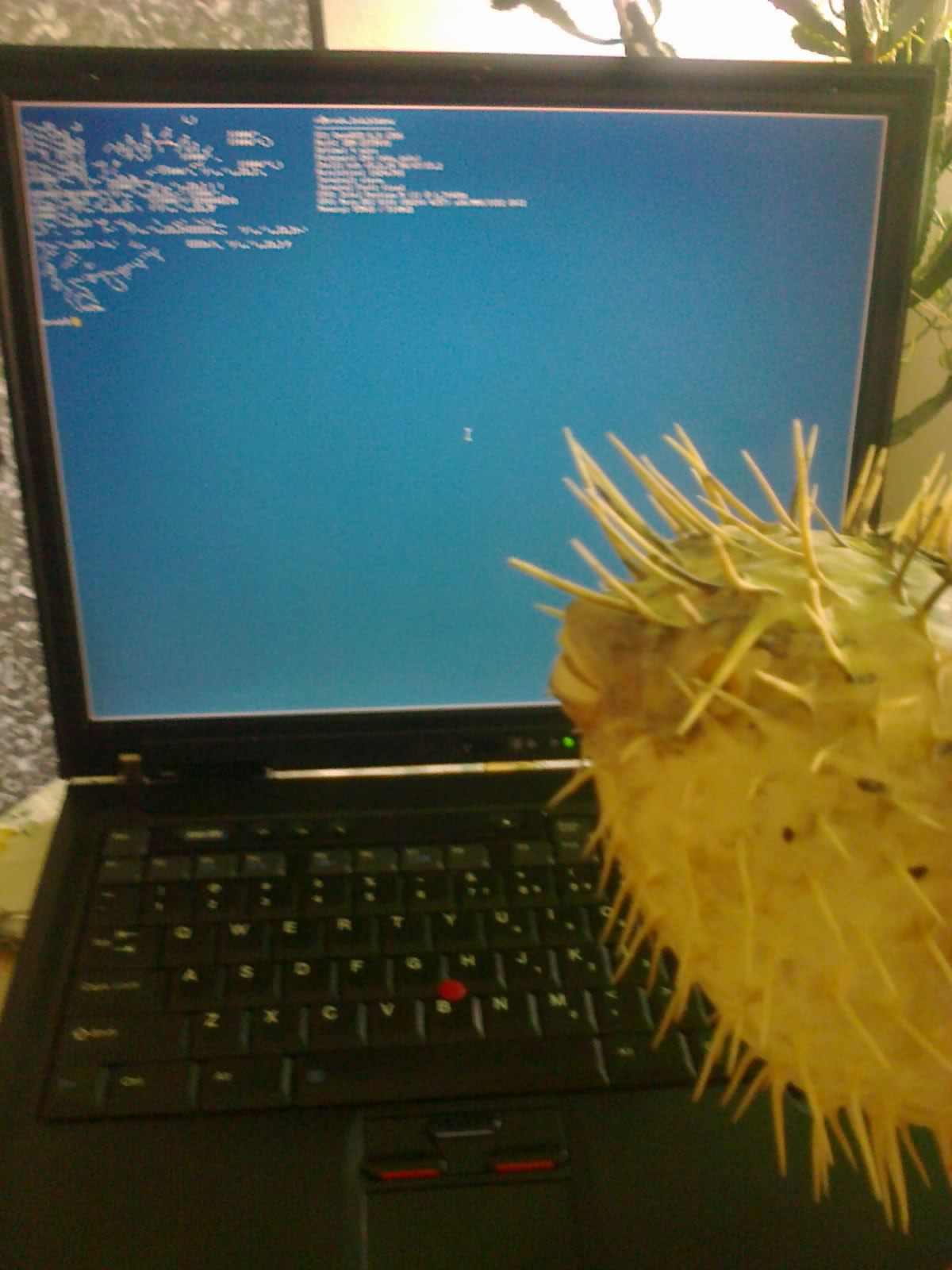 From cwm to ratpoison 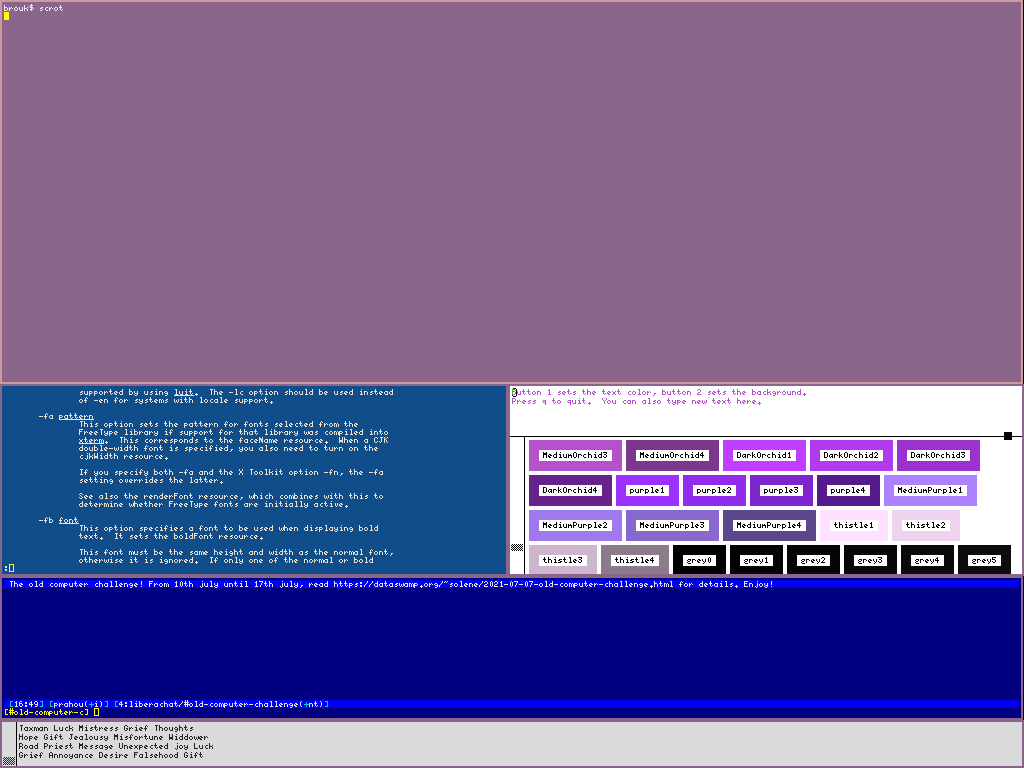